Throughout graduation season, I have had a variety of conversations about the traditions, pageantry, and symbolism connected to commencement ceremonies and the trappings of the academy.

I thought it would be timely to share some of the arcana that arises most frequently in those conversations.

During formal academic gatherings, faculty and often students will appear in academic regalia. There are different robes for each degree. There is an Intercollegiate Code on Academic Costume, which was established in the 1895 and has been amended a number of times since. Many institutions have in-house practices that deviate from these standards.

·      Master’s robes have extended oblong sleeve that hang below the wrist. I have been told that this is a vestige from a time when early scholars had a nook in their sleeves to keep their hands warm in unheated medieval environments.

·      Doctoral robes in the U.S. typically have bell shaped sleeves with three velvet stripes. Those stripes may be black, or the color of the discipline. Presidents of colleges and universities may have four stripes on their sleeves. I still wear my 30-year-old three-striped model, which was a graduation present from my wife.

·      There are hoods associated with each degree as well. They combine satin in the institution’s colors with velvet or velveteen in the color of the discipline.

·      Bachelor’s hoods are no longer the norm, but many institutions, including Susquehanna still use them. These are 3 feet long with 2-inch wide trim.

·      Master’s hoods are 3.5 feet long with 3-inch wide trim. These have an oblong extension that mirrors the dangling sleeve of the master’s robe.

·      Part of commencement at many institutions involves the “hooding” of graduate-degree candidates. At large institutions, this is sometimes done on the school level independent of the graduation ceremony.

Many institutions have customized robes for their graduates. The bodies of these robes are typically in a color(s) associated with the institution and often include an insignia, often the shield, of the university on the front velvet panels of the robe.

Here is an example from Boston University: 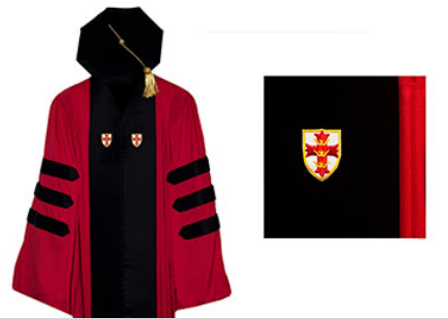 The Intercollegiate Code standardized colors for each academic discipline, which can be used for all of the velvet portions of the regalia. The default velvet color is black. Dark blue, which is aligned with philosophy is often the stand in for Ph.D. degrees is a variety of disciplines, but that is usually the choice of the consumer.

The word baccalaureate mean’s bachelor referring to the undergraduate degree. The word is derived from bacca lauri meaning laurel berry, referring to laurel wreaths placed upon the heads of individuals honored for their achievement in ancient times.

In modern times, baccalaureate is also the name for a ceremony, often religious, held at educational institutions before commencement. These typically include a “valedictory,” which is literally a farewell speech to the graduating class. The term valedictorian has come to be used to identify the graduate with the highest GPA because historically they gave that address to the class.

Much of the early history of grades in American higher education was associated with creating a way to determine which student would give that speech.

Colleges and Universities often confer honorary degrees to individuals of extraordinary accomplishment or service. The earliest known example of this practice was at Oxford University. In 1479, Oxford awarded an honorary degree to Lionel Woodville in recognition of his meritorious service as Chancellor of the University. He later became the Bishop of Salisbury.

The British composer, Sir Edward Elgar, composed 5 Marches, which comprise his opus 39. The first was completed in 1901. It was premiered along with No. 2 on a concert in Liverpool on 19 October 1901 and was an immediate success.

In 1905, the trio section was played at the commencement ceremony at Yale University where Elgar was the recipient of an honorary degree. This portion of the march has since been played at many graduation ceremonies in the U.S. and Canada.

In England, that trio is known as “Land of Hope and Glory.” Elgar adapted it for choir as part of his Coronation Ode for King Edward VII.

At most higher education institutions, a Faculty Marshall will lead academic processions carrying a symbolic mace designed specifically for that institution. The practice began in the 17th century in England. The mace was modeled on ancient battle clubs, but now represents the power of academic freedom and intellectual autonomy.

At many institutions, the Marshall / mace bearer is an appointed or elected position. At some, it is an honor bestowed on the longest-serving faculty member. At one institution where I worked, the mace bearer was the previous year’s winner of the outstanding professor award.

Around the edge of the silver bowl which tops our mace is the University’s motto, Ad Gloriam Maiorem Dei (To the greater glory of God). There are four rondels portraying: an itinerant preacher on horseback, the Seal of Pennsylvania, Selinsgrove Hall, and Martin Luther’s Coat-of-Arms. There are also 32 stars representing the states in the U.S. at the time of the University’s founding in 1858. The top of the mace is a three-dimensional rendering of the University’s Seal.

The same Seal is at the center of the ceremonial chain, or President’s Seal of Office, that I wear at all formal academic events. It was first worn by President Weber at the same ceremony at which the mace was introduced.[2]

[2] Special thanks to Carl Moyer for sharing a copy of the official guide to The Mace and President’s Seal of Office – Susquehanna University.