In 2019, I wrote a series of posts on the leading threats to higher education. At that time, they were:

6.    Poor Public Understanding of What We Do

To a surprising extent these challenges remain the same, but the past three years have changed the relevance and impact of these issues. In 2019, I wrote:

In the absence of war or pestilence, we know how many 18-year-olds there will be for the next 18 years, which is why we know there will be a marked decline seven years from now. Based upon historic behavior and trends, we also know approximately how many of them will enroll in college when they reach that age.

The fall of 2019 presented a surprise to many in higher education, because the anticipated number of traditional-aged students who enrolled in college nationally was 1.7% lower than anticipated. Pennsylvania missed the mark by 2.6%. The disruption that occurred this past year was not only varied by region, but by institutional type.

Little did we know that pestilence was around the corner in the form of covid-19, which has dramatically escalated that flight from higher education. In the past two years, over a million college students have stepped out of higher education. There are a number of factors driving this exodus:

·      Many students who enrolled during the pandemic dropped out after a semester of unsatisfying remote and hybrid learning experiences.

·      Many students chose to take a gap year or years, hoping to enter college when things get back to normal [Yes, I just cited Teen Vogue].

·      Based on conversations I have had with some of our students, they are taking advantage of the hot job market created by the “Great Resignation.” They hope to save up some money and return to school after things cool down.

The changes imposed upon the NACAC standards, which no longer prohibit institutions from actively recruiting students who have committed to another institution, have not resulted in the market turbulence many of us anticipated. Most institutions have not been aggressive in these efforts. I believe this is partly good sportsmanship, and partly the need to focus on retaining applicants in the face of pandemic pressures over competing recruitment efforts.

Following the economic downturn in 2008-2009, the expected family contribution of middle-class families stagnated for many of years. With inflationary pressures affecting other necessary expenses, the amount these families had left to pay for college declined. This is why the average out-of-pocket cost to attend many colleges and universities has declined over the past decade. 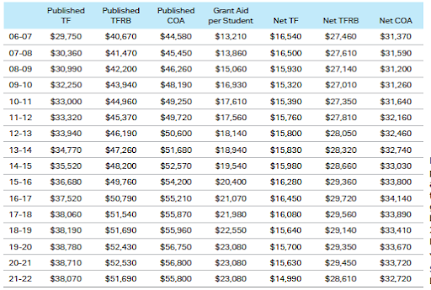 TFRB = tuition, fees, room, and board

In recent years, families’ ability to pay has finally begun to grow, but for many, their willingness to pay has not, which has put higher-education institutions into a bidding war with financial aid.

Because most institutions have limited financial-aid funding, these discounts are funds that are simply not collected. This is placing new financial strains on the majority of colleges and universities as the tuition and fees they collect fail to meet the costs to support their educational offerings. This is the crux of the “broken business model” in higher education.

The decline in International Student numbers logically accelerated during the pandemic. There has been some rebound this year. International graduate student enrollments increased by 13%, but undergraduate enrollments declined another 8%. The United States has lost its preeminence as a destination for international students. Current geopolitical aggressions and tensions will surely continue to stoke uncertainty in those markets.

The challenges associated with the “demographic cliff,” geographic redistribution, and limited reputation remain similar to 2019 with the exception of the impact of so many students dropping out of the higher-education pathway. Much of our effort in the coming years will be focused on reclaiming this “lost generation.”

One “Covid silver lining” has been a renewed awareness of how important in-person learning is developmentally and in terms of engagement. Millions of parents who a few years ago would have been indifferent about whether their children completed a degree on-line or in-person, have recognized what their students have lost due to the instructional realities of the past two years. This is liberal education’s opportunity to assert the benefits of learning in community.

The threats that join the list are student and employee wellbeing and divisiveness connected to Diversity, Equity, and Inclusion (DEI) efforts.

We have seen dramatic challenges in mental health around the world and across generations. The transition into independent adulthood that accompanies leaving home and moving into an academic community has always been a stressful time in students’ lives.

The hyper-vigilant environments college campuses have needed to become out of public-health necessity has made them some of the safest environments from an infectious disease perspective, but it has added to the historic stress of the transition to adulthood in new and not yet fully appreciated ways. We have adopted many new resources to help students to adapt and to catch up from what they lost since the pandemic began, but this will remain an elevated priority for years to come.

DEI issues have emerged as a leading threat and opportunity for higher education. Across the country, we see lawmakers attempting to dictate course content in secondary schools and higher-education institutions. Many colleges and universities have renewed their commitments to support equity and inclusion for their students and employees, as did Susquehanna, and many have struggled to articulate their positions.

The vast majority of the current traditional college-age population consider DEI and gender liberation to be high priorities. This includes not just representation, but proactive policies and practices. Gen Zers are already making their purchasing decisions based upon the DEI practices of companies, and as they make their college selections, those institutions that are visibly proactive in their inclusion efforts will be the winners.

There is more uncertainty now than in 2019. As higher education prepares for the future it will be more important than ever to be mindful of the perspective and experiences of the next generation of students so we are ready to meet the where they are, which will allow us to successfully help them to reach their goals.